Major clean up of litter left by flood completed

On Sunday 25 volunteers completely cleared the large amount of litter left by the November flood of the Derwent in Hopping Mill Meadow.

On 9th November 2019, following a month worth’s of rain falling in 2 days on already saturated ground, the River Derwent burst its banks in many places as many will remember. The dramatic picture below shows the extensive floods in Hopping Mill Meadow in Milford. 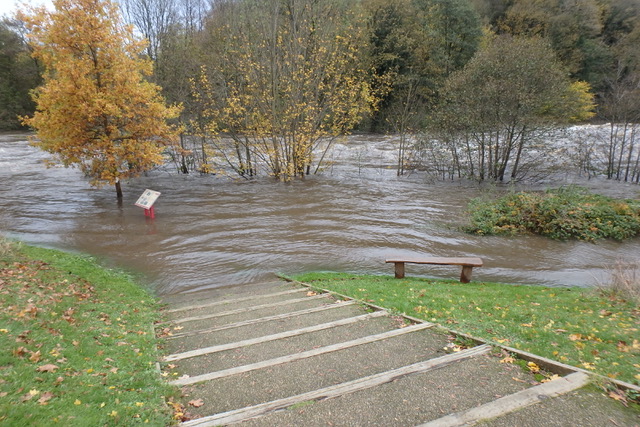 Once the floods subsided in Hopping Mill Meadow, large quantities of rubbish were left on the riverbank, much of it hung in the trees and brambles, and depressingly unsightly, as the pictures show. 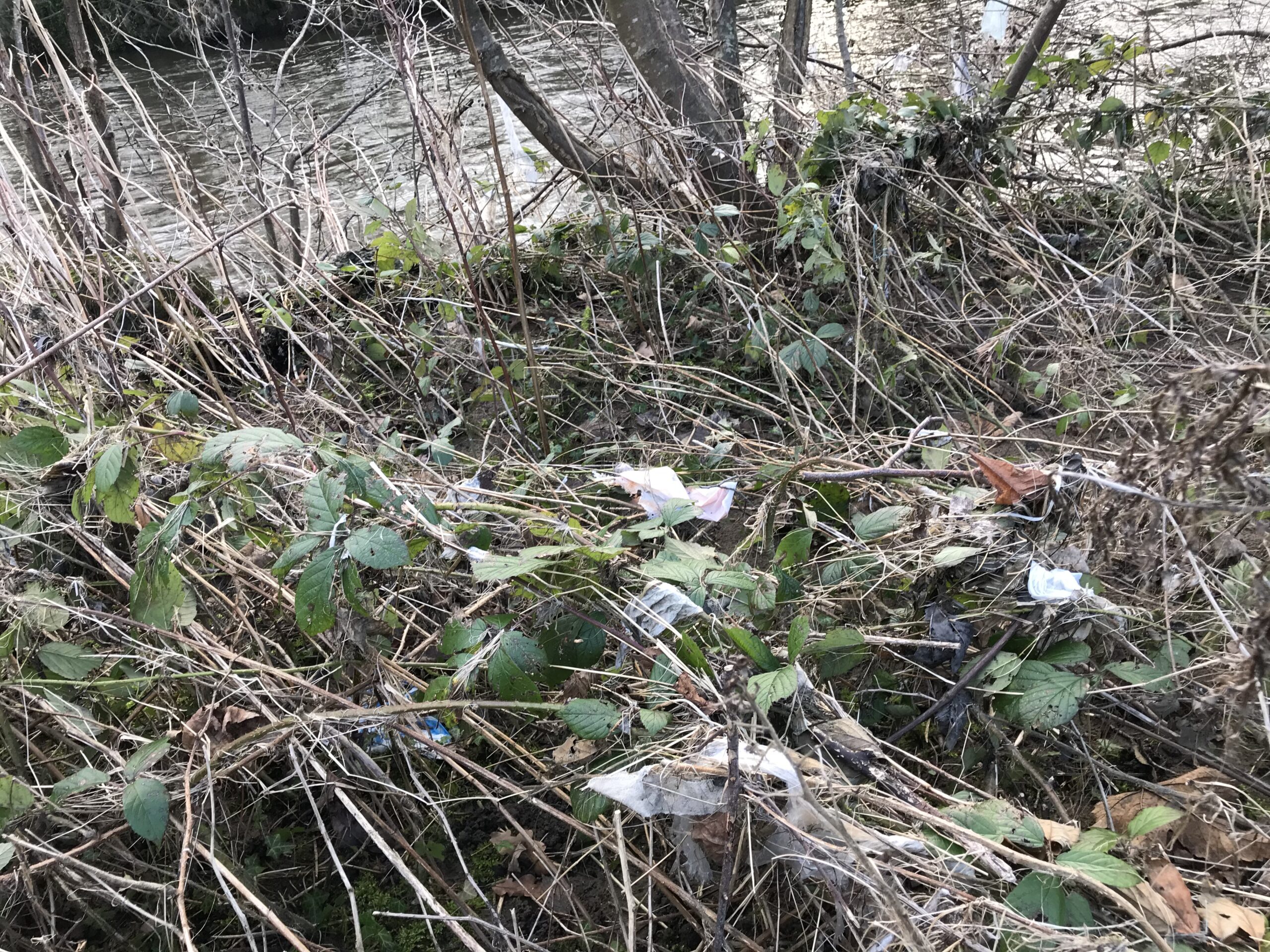 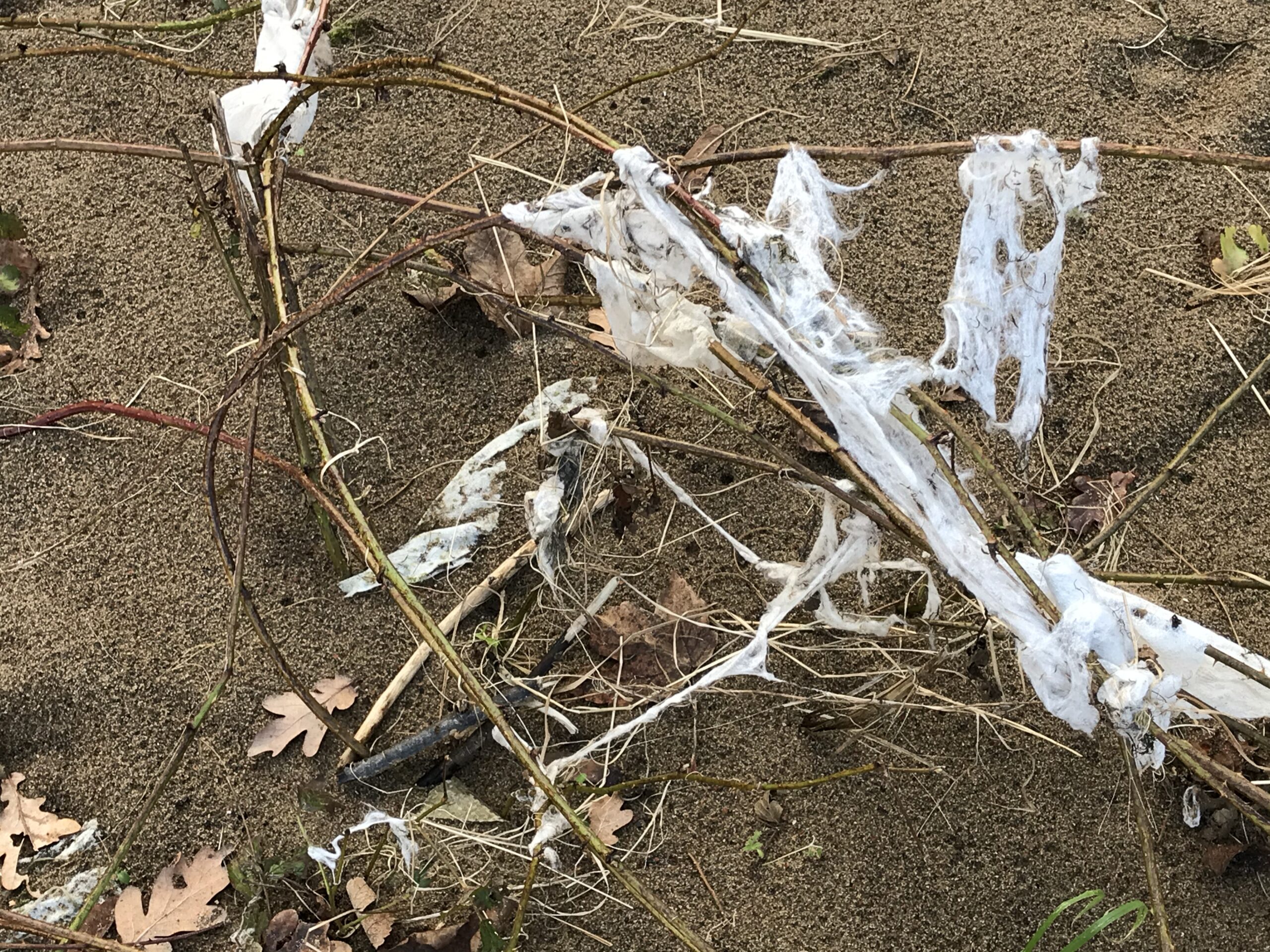 Rubbish hung in trees after the floods

This was far too big a task for one person to tackle, so when Kate Tuck’s litter picking group were looking for their next task, following their successful inaugural task of clearing of the path through the allotments reported previously in the website, this was ideal.

Posters were put up in the area (example below) informing people of the timing, and a notice put in this website. 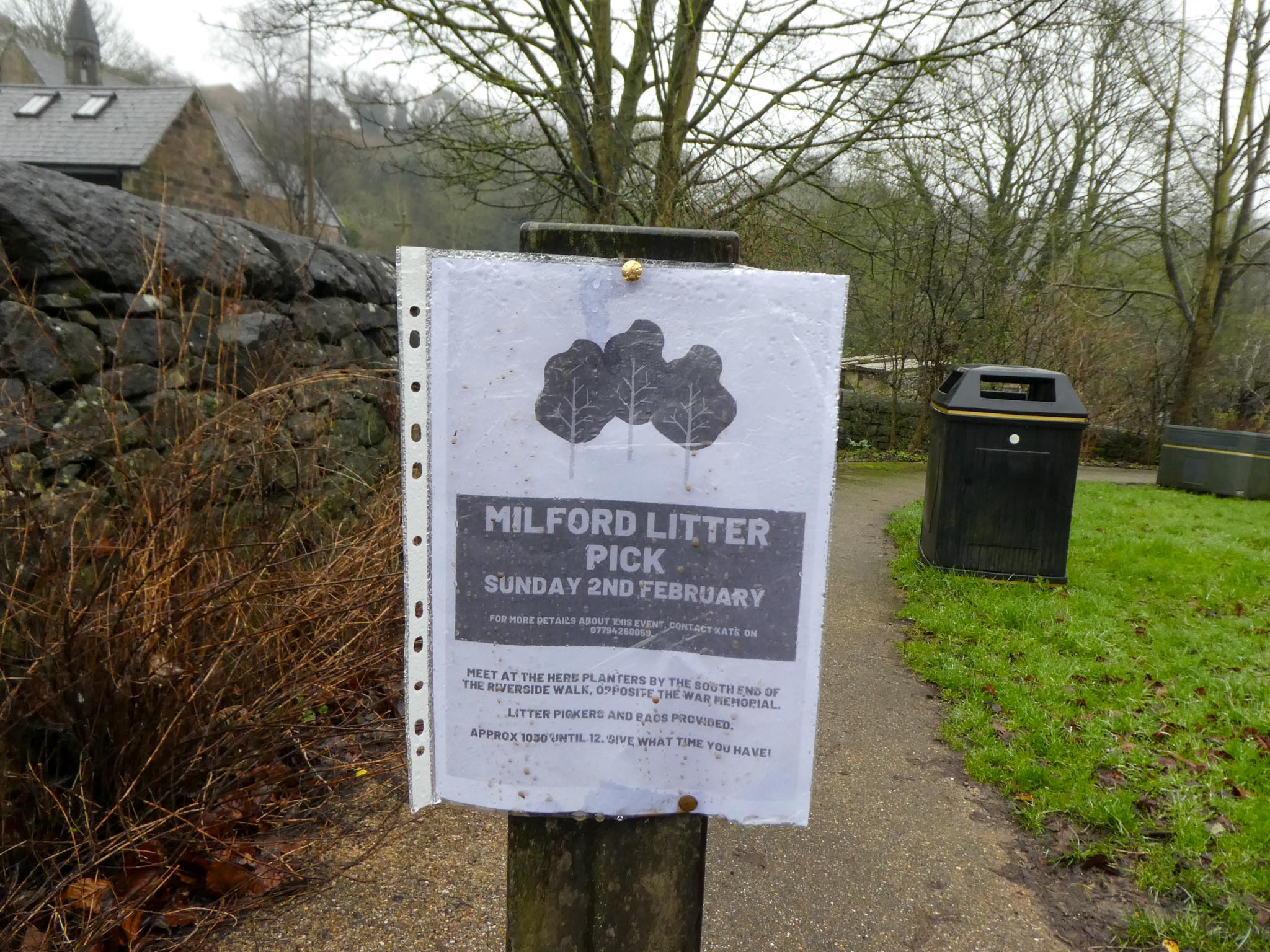 The response was overwhelming – 15 people turned up at the allotted time of 10.30 on 2nd February, but within 10 minutes another 10 had turned up, including young families, bringing the total to 25, despite the miserable weather. 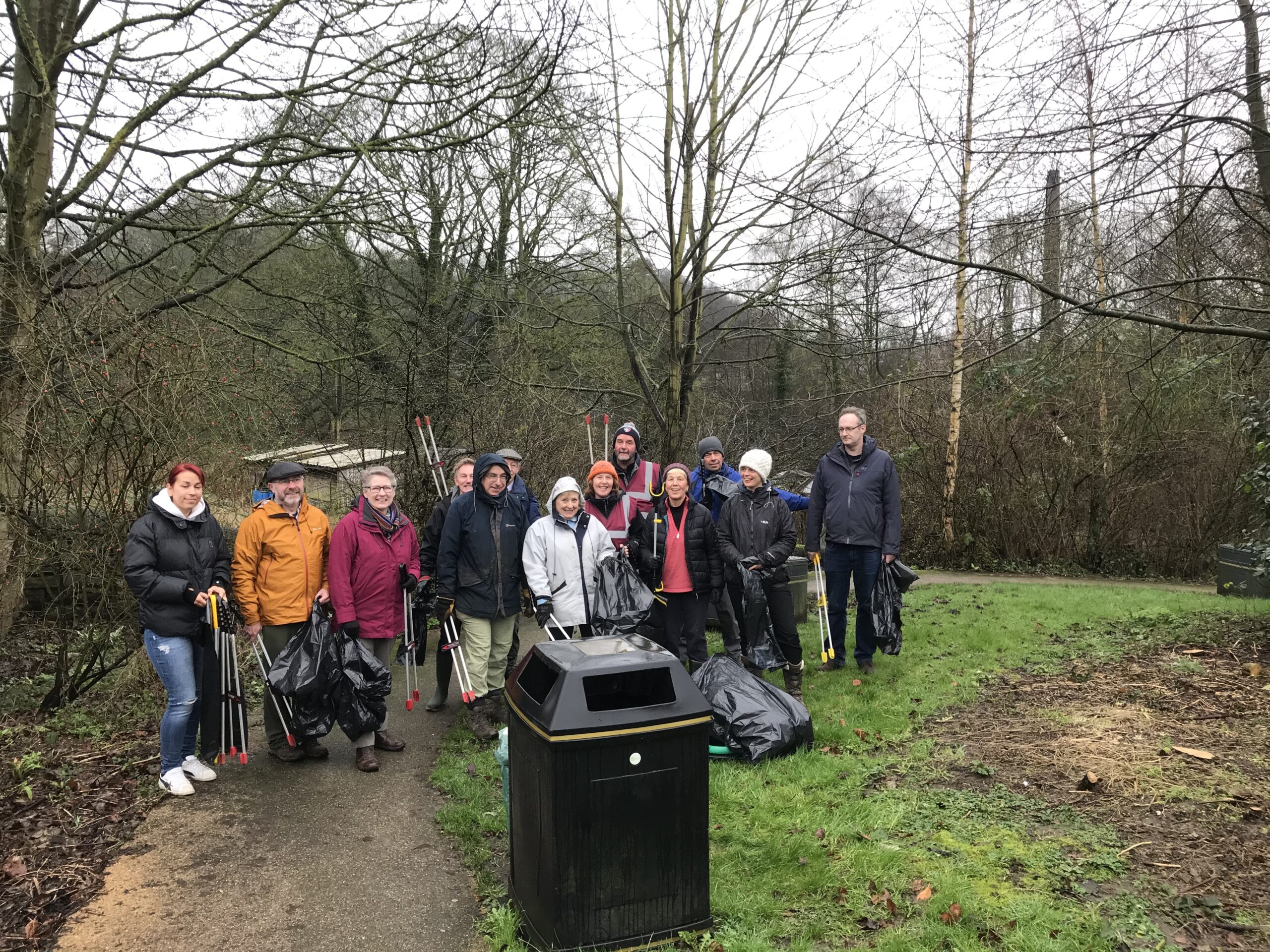 Armed with litter pickers supplied by Amber Valley Borough Council (AVBC), the volunteers fanned right along the entire length of the river bank in Hopping Mill Meadow and began work. 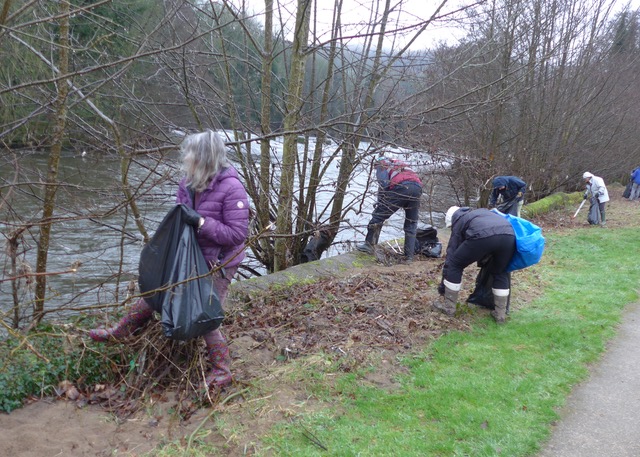 The volunteers tackling the weir

The rubbish was mainly that scourge of the modern environment – single use plastic – but there were also more unsavoury items, including pairs of underpants! Many hands make light work, and in just an hour the whole river bank was cleared, a fantastic achievement.

Along with the excellent clearing of vegetation undertaken by AVBC and reported previously on the website, and the extensive bank strengthening which has now been completed by The Environment Agency (picture below), the Hopping Mill Meadow has been transformed as the many walkers and joggers using the area will now notice. 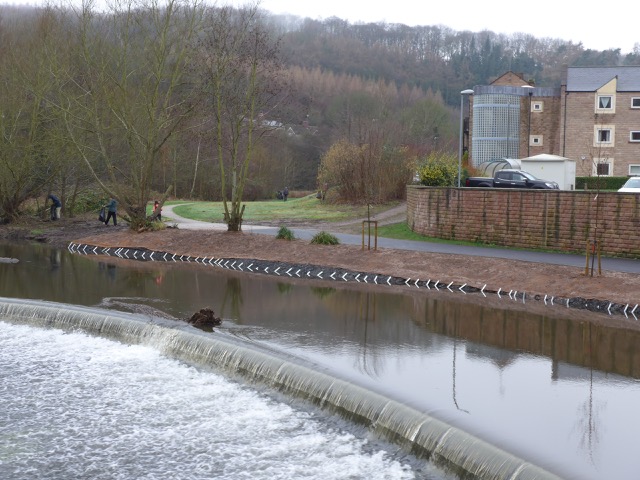 Environment Agency strengthening work, as seen from the weir, during the litter pick

For those interested in joining in future litter picks, please contact Kate Tuck by text on 07794 268059 and she will add you to the WhatsApp group.