It’s been a busy 7 months for Blooming Milford. Back in September we undertook our most ambitious project since our original renovation of The Triangle in 2013 – the purchase and installation of 4 benches along the riverside path in the Hopping Mill Development. This took 2 years of planning and jumping though bureaucratic hoops, but hopefully many of you will have already made use of them. If you have, you may have also noted the wild daffodils around the benches we planted this January. These should grow and spread like the ones in our corner by the A6 at the very Southern end of the Hopping Mill development.

The Blooming Milford team on one of their benches in March

Our next project – again, rather ambitious – has been the refreshment of The Triangle. Although still attractive, over the past 6 years since its original extensive replanting by ourselves and Belper Town Council it had become rather overgrown and crowded. So, with the help of Belper Town Council (who we must thank at this point) we have undertaken extensive pruning, digging out, replanting and weeding of the Triangle. This began in March last year and then in earnest in several sessions November – February. You will notice we’ve moved the rhubarb, pruned back some bushes and replaced some of the more thuggish plants and ground cover with smaller flowering shrubs such as hypericum, potentilla, mahonia and Christmas box. We’ve also planted large numbers of heathers, hellebores, tete-a-tete daffodils and snowdrops to give more year-round colour. You will hopefully already noticed the difference, with a swathe of snowdrops appearing from nowhere in February under the James Grieve apple, presumably due to the clearing letting in light, a spectacular display of daffodils, wonderful forsythia blossom and a much better view from the A6.

The renovated Triangle – from top left clockwise: the Blooming Milford team at work in February; forsythia in bloom; better view from the A6, with Belper Town Council pansies in foreground in March; hellebores, tete-a-tete and daffodils in March.

We have a little more work to do to complete the job – some more pruning, planting of annual seeds (including poppies near the memorial) and planting of late summer herbaceous perennials.

We have also planted more tete-tetes in the play area, to complement those we planted last year and snowdrops from previous years, now giving a very nice display in February (see picture below.) 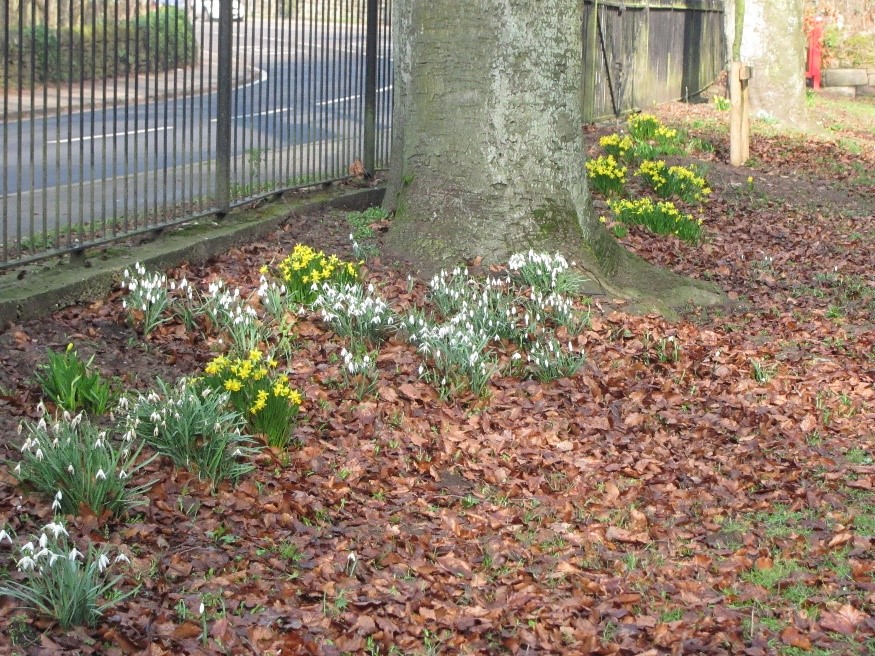 We have also planted wild bluebells by the river in the Hopping Mill development (see below) following last year’s successful planting on the ramp coming down from Millers Way to the riverside.

Coming soon – refreshment of the two large herb planters on the riverside at the most southerly point of Hopping Mill Meadow. 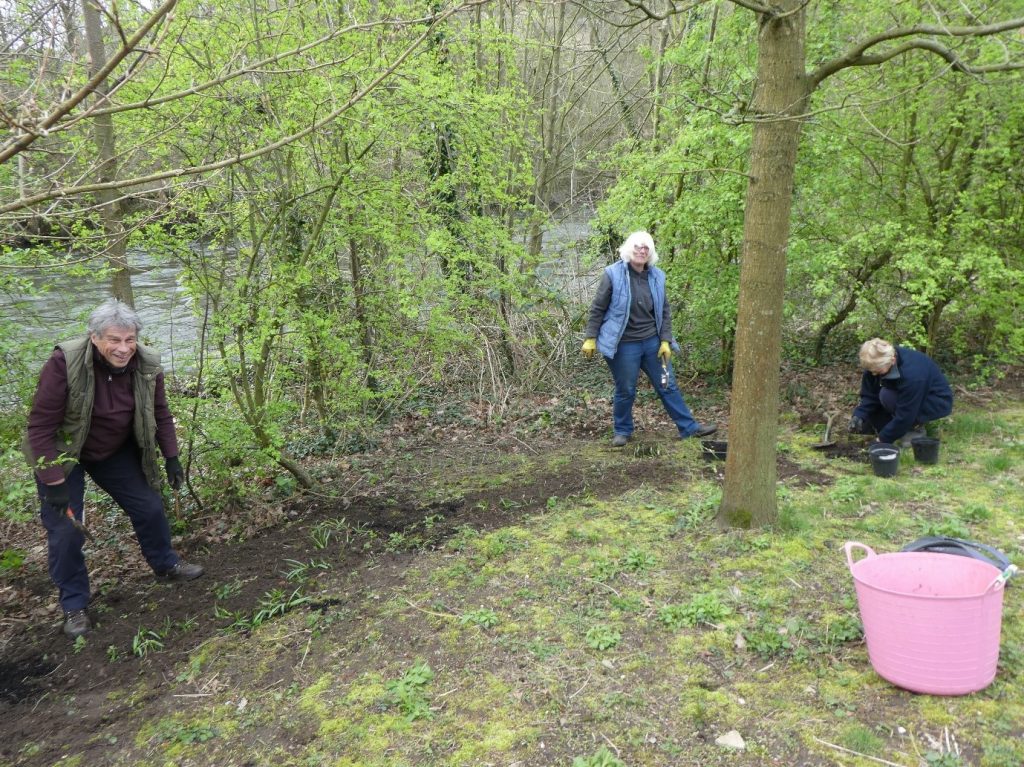 It should be noted that our funds are generated almost entirely from selling plants from our gardens. Thank you to all those who bought plants from David Moreton’s open garden on 13th April – we sold more there than we have ever done at any other sale. We also intend to sell plants from our usual stall outside the school during the Milford May Fair on 11th May. Hopefully see you there!